6cL6VYVSLRSAXEDKCL3rshn7JIzaELSFtdTro8Q9jBE
back to search results

Sunrise, Saint Mary Lake, Montana.
After a few of days of of hiking in unsettled weather in Glacier, we would be moving on. We camped the last night here on the East side near St Mary Lake, with a heavy sky that was not looking too promising for sunrise. We rose early anyways, and went to a vantage point that frames Wild Goose Island in the center of the towering peaks flanking the lake. It didn't look good in the pre-dawn light--the sky behind us was overcast too, but then it began to break up a little, then a little more, and the clouds began coloring, spreading out behind and before us, and the overcast and fog in the valley began lifting. It was time for sunrise, and this was the moment of truth determining whether or not we'd have a classic sunrise. On the plains behind us, way out of sight because of the peaks looming there, the sun broke the horizon and began lighting the tips of the range before us, and I began burning film (this is a slide). In late summer the sun was rising to the southeast, the light like a beacon over the Great Plains and up the southeast arm of St Mary to flash on the northwest massif while leaving us still in shadow. The clouds were still heavy with water and soaked in the light rather than reflect it back, fortunately, and as the beam moved down Going To The Sun mountain on the right, I could swear it's mass was reflecting that red right up into the bottom of the clouds. Faith restored. 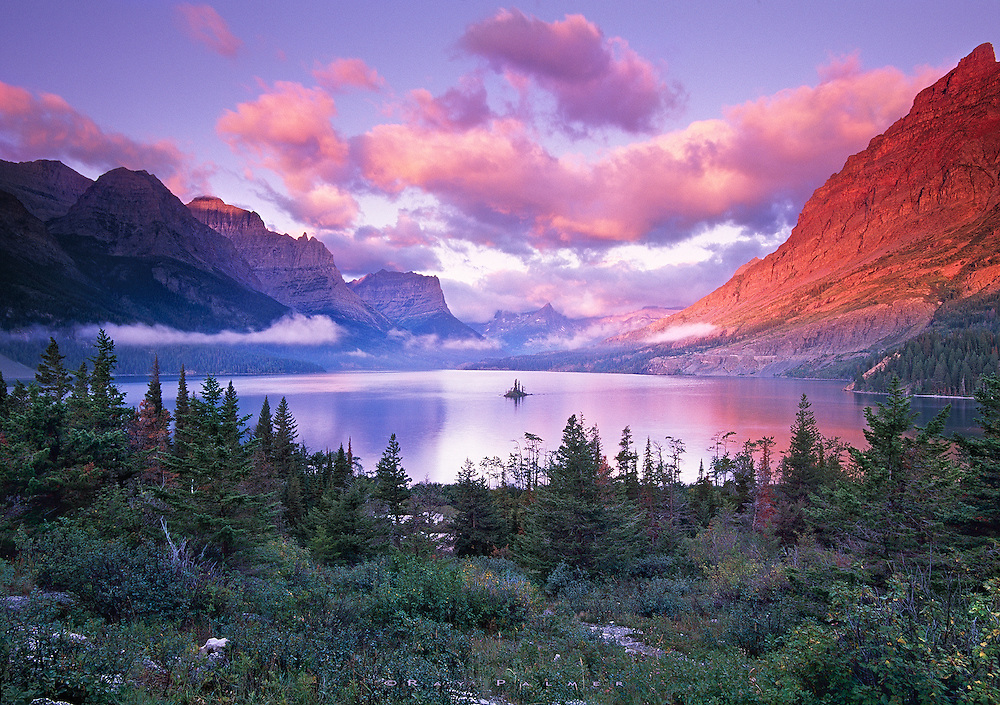